One in seven prefer divorce over trips to the dentist 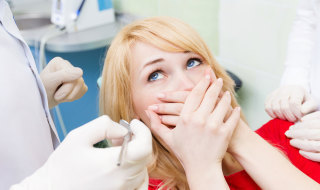 One in seven prefer divorce over trips to the dentist

One in seven patients would rather endure a divorce, move house or have a job interview than endure half an hour in the dentist’s chair, it has been revealed.

With one third of Brits admitting to not having visited the dentist in more than two years it is inevitable that the state of the nation’s teeth is suffering.

According to the Dental Health Organisation, 12% of patients suffer from extreme dental anxiety so what exactly is it about the dentist that they fear?

It seems that for men the reluctance stems from fear of being scolded about the state of their teeth, with nearly a quarter of men surveyed (23.3%) citing this as the main reason for avoiding checkups.

They were equally worried about experiencing further pain and when asked to state any other reasons 38% were worried about the impact on their wallet.

A small proportion also find the reclining of the chair a problem (3.8%). The sterile smell and invasion of personal space were also cited as reasons to avoid the dentist.

Age also plays a factor in how much patients worry about a trip to the dentist.

The least worried were the 18-24 year olds with just 8.7% saying the dentist was the most stressful event they could experience.

The results also highlighted some regional differences in attitudes towards the dentist.

Londoners and the Welsh were the least likely to fear the dentist with just 5.9% of those surveyed in both regions classing it as the most stressful event.

However those based in the north east, east of England and east Midlands were the most likely to fear the dentist’s chair with one in five people describing the dentist as their biggest fear.

Sandeep Senghera, founder of Toothpick and former dentist commented: ‘While many of us may never learn to relish the thought of a trip to the dentist, certain things could be done to help.

‘For instance clarity on the cost breakdowns for those who worry about money, better systems to enable nervous patients to select a dentist specialising in treating those with dental phobias and more choice and control over who we see, could go some way to making us less fearful.